The Korean name for the Beautiful Foundation is Areumdaun Jaedan. “Areumdaun” is a Korean word, normally translated into “beautiful” in English, and “Jaedan” means “foundation.” When you put those words together, you read it as the Beautiful Foundation. However, Areum, a part of the word “Areumdaun,” also has its own meaning, which is the amount that a person can embrace in his or her arms, such as a basket of fruit. When you add Daun, the rest of the word “Areumdaun”, you arrive at the proper amount of richness or affluence for one person. This interpretation leads us to reach the realization that others should be given the opportunity to enjoy fruit with us in the world, and furthermore, they have the same value as us.

The true meaning of the idea that others have the same value as ourselves can only be understood by treating others as we would treat ourselves. This is true beauty. When we consider our neighborhoods, and the world that we live in, as being in us, as part of who we are, this beauty turns into love. The combination of this love with a generous heart leads to sharing with others. This is the spirit of the Beautiful Foundation. The Beautiful Foundation aids in the creation of a more affluent world. It is clear that individuals cannot simply focus on accumulation of their own wealth, engaging in unfair and corrupt practices in order to enhance their own affluence, while leaving others within the grasp of crushing poverty. Conflict and a multitude of social ills are the result of this course of action.

The Beautiful Foundation also aims at a just society. A society with unequal affluence is unjust. A justly affluent society must consist of honest, devoted, diligent, and caring individuals providing aid and assistance to the underprivileged, the disenfranchised, and those who fall through the cracks.

The Beautiful Foundation is a nonprofit organization led by the voluntary participation of citizens in sharing. It was established in August, 2000, with the purpose of spreading a mature philanthropic culture and supporting neighbors in community and public-benefit activities.

Making sharing a part of life for a society thriving together
The Beautiful Foundation pursues the society where everyone practices the value of sharing in everyday life and individuals and community thrive together. 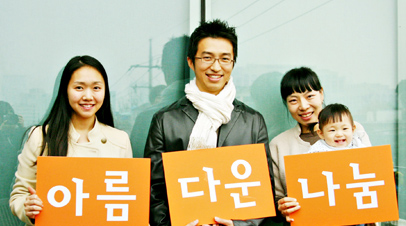 The diffusion of giving culture by acting citizens
Sharing is the value that enriches our everyday life and changes the society. The Beautiful Foundation wishes to be the most trustworthy partner of donors, one who dreams of a warm and just society and practices the value of sharing in various ways. 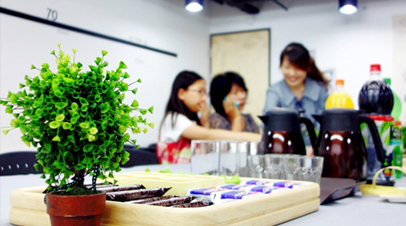 Transparency
Based upon the “Transparency Program” that it instituted in accounting for the first time as a Korean nonprofit organization, the Beautiful Foundation has let an external accounting firm audit it since its establishment, and anyone can access the financial and managerial information of the Foundation. The funds raised by the Foundation are being distributed only through the objective and fair screening and evaluation of the Grantmaking Committee composed of external experts. Also, the Foundation is trying to be a trustworthy foundation by publishing annual reports and regularly reporting fund status to its donors. The Beautiful Foundation is creating an honest and clean philanthropic culture by transparent fund management and information disclosure.

Public benefit
The Beautiful Foundation supports creative public-benefit activities that enhance the quality of life of all citizens. It finds the roots of social problems and resolves them. Also, the Foundation sympathizes with the pain of others and realizes the value of public interest based upon which the community is willing to assume a responsibility for resolving the problems of individuals and groups. It does this through the 1% Sharing Campaign that arouses civic consciousness and creates changes of everyday life.

Mutual respect
Sharing is the social value in which givers and recipients encourage and empower each other. The Beautiful Foundation guides donors to various venues for donating with regard to knowledge of their life history and understanding of personal situations. In addition,, the Foundation makes its best efforts to fully respect the human rights and privacy of recipients during the process by which helping hands reach them.

We associate trees with vitality, life, and giving.
It is these attributes that the Beautiful Foundation hopes to promote through all of its programs and initiatives. The orange color in the logo represents maturity and health. This tree is not like other trees in the sense that it has seeds sprouting from its branches, not leaves. In time, each seed descends from the tree to the earth and grows into another tree. Growth quickly becomes exponential. Giving works in much the same way. The gift of one individual, no matter what the size is, has a ripple effect upon society. Giving begets goodness and more giving. The Beautiful Foundation is not made up of one person, one corporation, or one group. It includes every person who engages in small acts of sharing for their neighborhood and society.
The Beautiful Foundation was created and sustained by the passionate hopes and empathy of ordinary people. The Foundation is owned by these beautiful people who contribute what they have earned though their sweat and hard work, preciously sharing all they can.